One of the largest trilobites out of Morocco sold in large quantities at various rock, mineral and fossil shows, the Acadoparodoxides briareus is well known, but it is also one of the most restored and faked trilobites.  To buy a good specimen that is not restored is considerably more expensive. The example below has about 10 percent restoration which is considered very good.  As the foot long ruler shows this trilobite measures thirteen and three quarters of an inch long from the tip of the posterior pleural spines to the anterior edge of the cephalon. It is characterized by not just size, but a glabella that expands forward and is larger in front than in the back of the glabella unlike Protolenine types (Hamatolenus, myopsolenus, etc.). The difference between A. briareus and A. nobilis and A.ovatopyge is the pygidium.  The briareus has a rounded pygidium while the ovatopyge and nobilis pygidiums are oval shaped and somewhat triangular respectively. 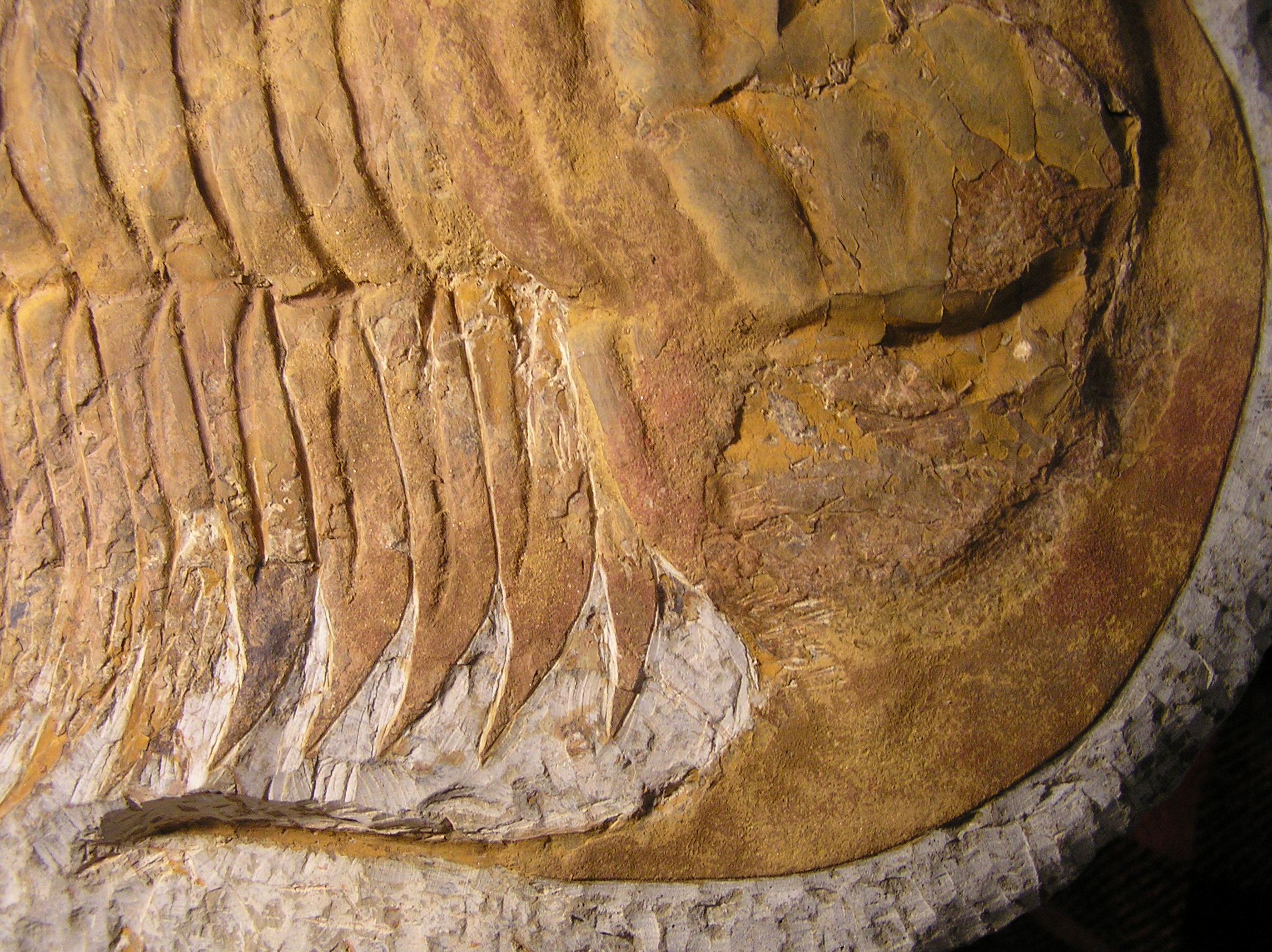 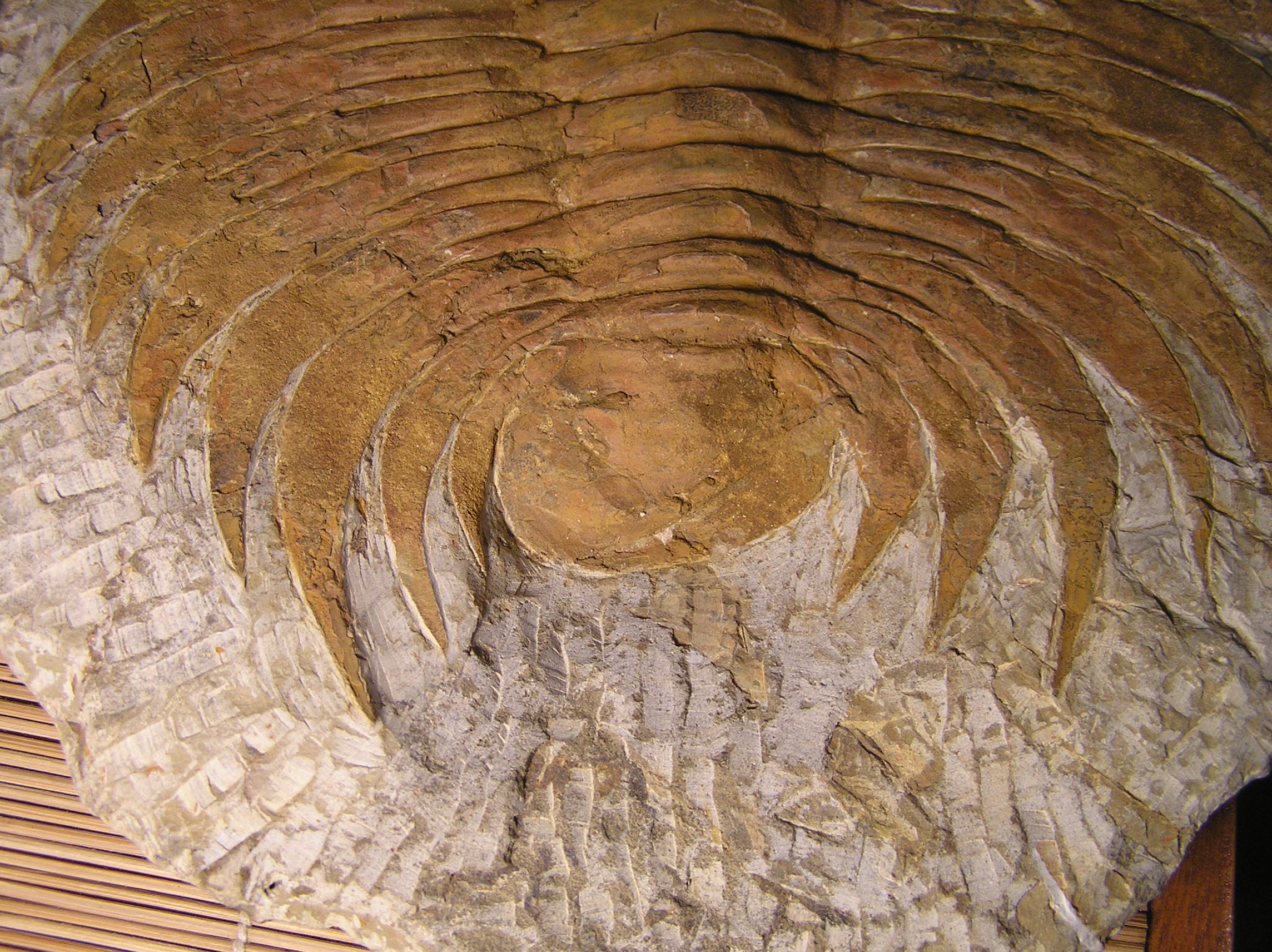 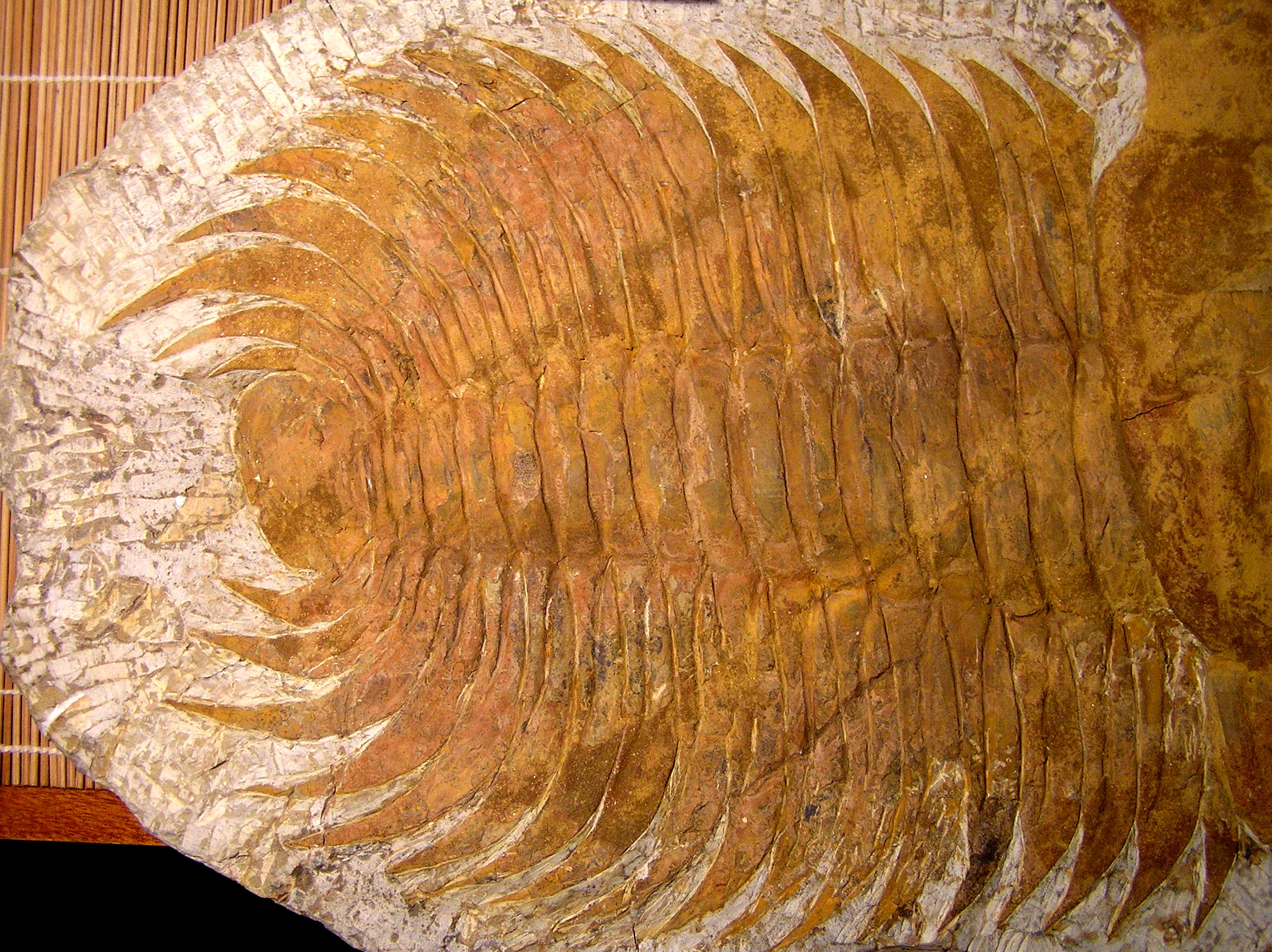 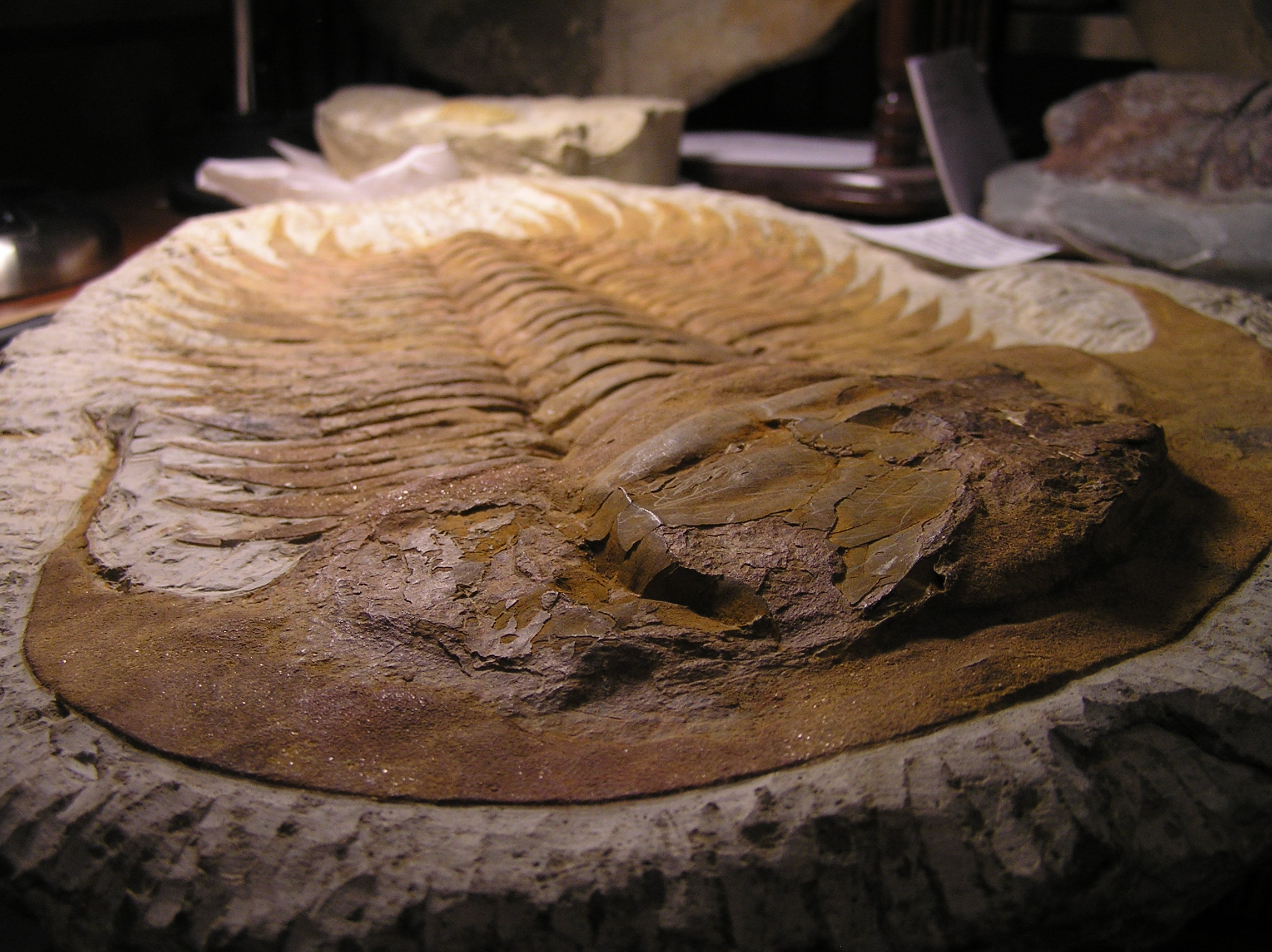 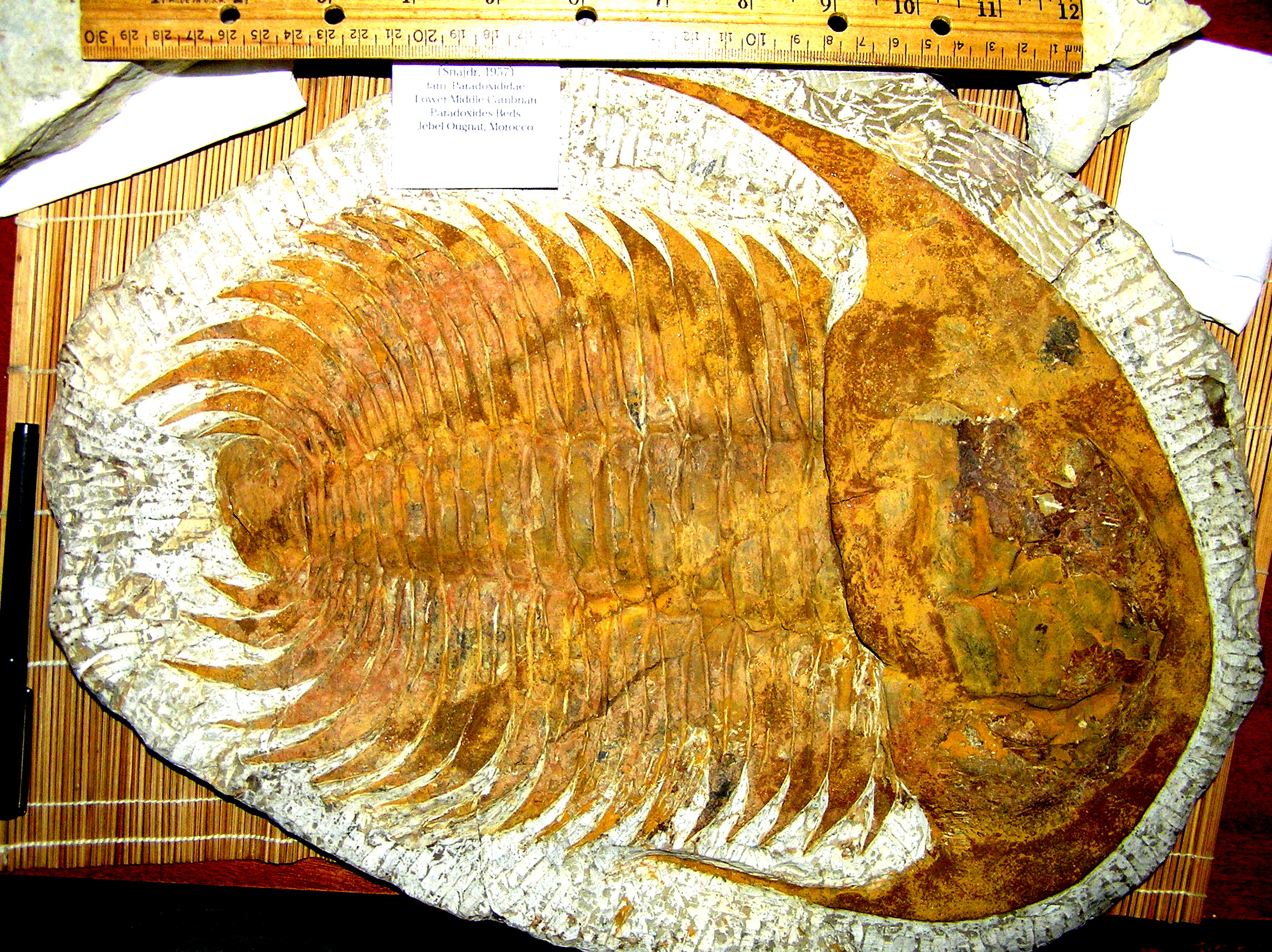 During the Lower Middle Cambrian Age in what is now Morocco, the trilobite Acadoparadoxides briareus was one of the largest trilobites that lived.  It could grow over a foot long.  Very few predators could eat this animal including the predator Anomalicaris.  During the Cambrian and the following Ordovician trilobites of large size like Acadoparadoxides roamed the seas, and since the seas contained most of the fauna this age could be seen as the age of trilobite dominance.  Many different species radiated in the most outlandish forms and the most varied types as any species to have lived on this earth.  What is fossilized is the outer shell of the trilobite much like a crab shell on the beach. In reality inside this shell was the guts, the brain, the legs, the gills and the living animal, and would look different than the shell by itself.  Stromatolite mats made up of blue green algae formed the reef system of the Cambrian and Ordovician seas and was very different from the reef composition today.